Someone is always looking after me!

It has now been 3 years since I have been researching Zambia, agriculture, GMO’s, organic gardening, permaculture and SEEDS.

Actually 9 years if you include the research I did when I found out my sponsored child lived in Zambia in 2005 when he was 10 years old.

On this trip I was more organized and kept more accurate journals. One reason is I had so many questions I wanted answered prior to going, the other reason was so I could write these blogs. As always, I have to tell a story from the beginning so here it goes!

Here I am at the airport leaving Toronto with, as always, way too much luggage. This time on my own without anyone to help me carry it. I think I built muscle and lost weight just getting on the plane. I took 3,  50lb. suitcases, 2 of which I left there, an old computer, which I also left there to record our stats, my camera bag, a small cloth purse and a backpack with my clothes in it. That dollar store hat gave away that I was a tourist, but I tell you in that hot sun, in the middle of a garden, it was taking care of my head.

Unfortunately I didn’t get a picture, but I met a woman in line waiting to check in and pay the $150.00 I had to pay for my extra suitcase. I even left many items behind that I had hoped to take like stuffed animals and clothing for the kids and still had three suitcases at their maximum weight of 50lbs. I took approximately 25lbs of all types of vegetable seeds, a soil test kit, minimal clothing for myself, a pillow, comforter, medical supplies and gifts of clothing donated to the cause. I think it was the 5 “How to Grow” binders that weighed the most. I printed out how to grow all of the vegetables I was taking to give to the 5 contacts in the 5 cities in Zambia. Lusaka, Chipata ( Lundazi District), Kaoma, Mongu and Kalabo ( Luoke West).

The woman’s name was Frey which means SEED in her Ethiopian language of Amharic. When she told me her name, it brought tears to my eyes. What are the chances? I am in a line to go to another country to build a tree nursery for my non profit organization called SEEDS and I meet a woman who’s name is SEED. What a great start! This is meant to be and it just confirms that there are no coincidences in life.

I was fortunate to have a seat between myself and the young man sitting by the window. I settled in and started watching the movie Gravity, with Sandra Bullock. I thought of my friend Millie who’s band used to play the song Gravity by John Mayer in her band and her daughter Jami who had come to Zambia on my first trip in 2011.

I don’t know if you have seen the movie Gravity but it is pretty intense right from the get go. You see the actors bumping around in their space suits ( outside of the aircraft) and here I was in this big 787 air plane doing the same thing. As I looked out the window to see what was going on, the sun was shining  but the plane was bouncing like a ping pong ball. It was quite surreal!

My eyes were drawn back to the small screen in front of me as I heard George Clooney say” Ryan, thats a funny name for a girl. Bullock replied” My dad wanted a son” and then I cried again.

My name is Joanne, my nick name is Joe and I have always spelled it with an “e”. My dad always wanted a boy as well and that has been my small way of being a boy for my dad. 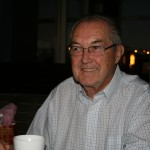 The young man sitting two seats away from me startled me when he broke into a loud laugh,  he was smart and watching a comedy.

Isn’t it wonderful that there are always things in life that bring us back down to earth, back to our senses and usually when you least expect it.

Someone is looking after you!

That is how the rest of my trip went. I did not fear again!