This little boy, who is now 3 years old, soon to be 4, is no longer afraid of me. 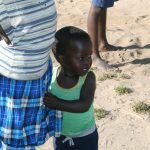 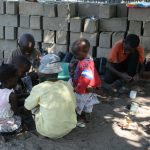 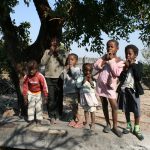 teaching the kids to whistle 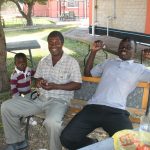 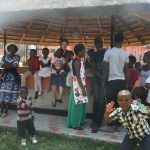 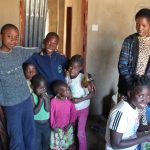 Hickson in the green shirt

The first year I met him, 2014,  he would not come near me. I think he had never seen a person with blond hair and silver highlights. LOL.

His name is Mulyokela but they call him Hickson and he is the cutest little thing.

Hickson used to grab onto any one he could reach, or hide behind anyone’s leg just so I couldn’t get him.

The rest of the children used to laugh at him because he was afraid and push him towards me. I told them to leave him a lone. He would come around in his own time.

When Eilish & I visited Mongu in 2015, Hickson was no longer afraid. His mother, who is a teacher had spoken to Hickson and told him not to be afraid of me.

She actually brought him over to me and told him to give me a hug, which he did with great caution. We all smiled and made a big deal of it and I thanked him for the hug. By then end of our visit he was approaching me on his own and wanting a hug.

Every three months I try to send non-GMO vegetable seeds to Barotseland to hand out to those in need.

I also send small useful items that I think they will need like soap, organic pest control, gently used unlocked cell phones and small gifts like hats to our volunteers in Mongu.

In May, when I sent the last batch of seeds, I sent some stickers donated by Anne Ellis and Seamus Caufield to give to Hicksons Mom to give out to deserving students. I also sent a construction truck puzzle that Hickson can put together with his older siblings.

Fredrick sent me a picture of himself, Hickson and his Mom, thanking me for the puzzle.

Small things make such a huge difference to a little boy who is growing up into a fine, confidant human being!

If you can, please donate your time to help with our seeds yard sales ( Aug. 6th & Aug.13th, 2016),  or a financial donation so I may continue to send seeds to grow fields like this. Hickson’s father is a farmer and that is how he feeds his family.

The Harvest is their future!