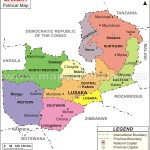 Mongu and Kalabo are in the purple area of this map

sitkoni1@msu.edu. Paper prepared for presentation at the